The Las Pavas Community Continues to Peacefully Struggle for their Land

The people of Las Pavas are a sustainable farming community in the south of Bolivar Colombia. Through the years Paramilitary violence has forced the community to leave the land but each time they have returned. In 2006 the community was in the process of claiming its land rights under Colombian law when a Daabon consortium[1] bought the land from absentee owner, who had lost his rights to the land due to years of abandonment. On July 14, 2009 through corrupt means and on behalf of the Daabon palm conglomerate and its subsidiary CI Tequendama SA, the Colombian riot police forcefully removed the community of Las Pavas. As of the current date it has been more than one year since the illegal eviction of the 123 families (more than 500 people) from the Las Pavas farm. Throughout this year, the community has been living in a humanitarian crisis with no food security and no land.

The findings of a June 10, 2010 independent commission sponsored by The Body Shop and Christian Aid, investigating the displacement of the Las Pavas community and palm production on Papayal Island, bore out the validity of complaints the community has repeatedly raised and confirmed that the land is not suitable for this type of agribusiness, by virtue of their deleterious effects on the region’s environment and culture.[2] The damage includes the destruction of river channels and lakes and other bodies of water,  and the clear cutting and burning of the community forest, an area preserved for hunting and wildlife preservation.

In early October 2010 the cosmetics retailer The Body Shop announced it would stop buying palm oil from Daabon. The Bodyshop announcement came as a result of direct international pressure from different entities including CPT and pressure which included various direct actions in front of stores in the US, Europe, and Canada.   In an October 28, 2010 public press release, Daabon announced that it would end its oil palm operations in Las Pavas. Contrary to their public press releases Daabon has not ceased their palm production operations in Las Pavas.[3]

In January 2011 the Las Pavas community and accompanying entities gathered together as the Mesa de Interlocution de Sur de Bolivar[4] and released a statement to  inform the national and international community that:
1. Palm cultivation activities by Daabon in Las Pavas continue uninterrupted.
2. The community of Las Pavas continues in dispossession, displaced from the territory.
3. The impacts of environmental and cultural damage by the palm industry continue to affect ecosystems in the territory of Las Pavas and the region between the Papayal and Magdalena Rivers.

Notwithstanding  the documented evidence of  Daabon’s complicity with displacement and environmental damage Daabon’s international marketing campaign claims “to ensure that our activities be socially, economically and environmentally sustainable.”[6]  Furthermore Daabon looks to be the first Latin American palm oil producer to be RSPO certified.  RSPO certification is the global guidelines for producing palm oil supposedly sustainably. Daabon’s plan is to RSPO certify their Colombian Palm plantations by 2012.[7]  In reference to the human rights and environmental destruction of Las Pavas Daabon continues to deny complicity and responsibility of the Las Pavas community’s concerns.[8]

As such the Las Pavas community, and the accompanying groups, has launched an international and national nonviolent resistance campaign to pressure Daabon to return the land to the community. The community was notified that Daabon would be present at two important international food fairs in Germany Fruit Logistica 2011 Berlin and Biofach 2011 in Nuremberg, and began to mobilize their international allies.

CPT Europe sent a letter to German food manufacturer Allos & Alnatura who purchase palm oil from Daabon and are planning a CPT Europe public action in March. Three European NGOs Working Group Switzerland, Kolko – Human Rights for Colombia, and Association Save the Rainforest sent a letter requesting that the organizers of the European food fairs deny Daabon any display platform, and that Daabon should be sanctioned in their efforts to RSPO certify their palm plantations in Colombia. The community has also participated in a series of meetings with different international embassies such as that of the United States, Canada, Holland, and others in order to elevate the profile of their case internationally. The community looks to mobilize church groups and other organizations in the United States during Palm Sunday. The Las Pavas community leaders continue to ask what the Colombian land institution (INCODER) is doing in terms of recognizing the right of possession of the displaced and dispossessed people of Las Pavas.

The community continues in its efforts to fortify itself spiritually and mentally for the inevitable return to their lands. The community recently participated in a workshop of nonviolent resistance and individual protective measures against police brutality. Such activities have not come without repercussions. In January Aportes San Isidro of the Labrador Consortium sent out flyers and announced through the radio that the community of Las Pavas was planning a forceful takeover of the land and basically threatening legal action against any and all who help the Las Pavas community in their land claim.[9] On the 19th of February 2011 ten armed men entered the village of Buenos Aires with a known paramilitary of the area looking for one of the community leaders. It was said that there was an arrest warrant. After further investigation it was determined that no arrest warrants are pending, but that national police have started an investigation against three leaders of the community for the alleged crime of possible land invasion, and clandestine meetings in preparation for the crime. In other words they are being investigated for the possibility that they will return to land that is rightfully theirs. Notwithstanding the constant threats the community continues to make public their claim for  all the legal guarantees necessary for the restitution of their land including the right of return as established in the Colombian national constitution and international law.

[1] Aportes San Isidro is co-owner of the property with CI Tequendama SA (palm oil susidiary of the Daabon Group) who jointly purchased Las Pavas through the Consorcio El Labrador a consortium between the two companies.

CPT (Christian Peacemaker Teams) Colombia is an International organization seeking to be allies for and partner with communities who are threatened with displacement and violence. We try to support their initiatives to promote justice and peace and their resistance to attempts by those who oppress them and seek to dispossess them of their land, culture and livelihoods.
View all posts by CPT Colombia »
Contrary to what it previously announced, Daabon has NOT left Las Pavas! » 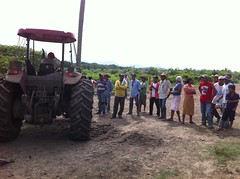